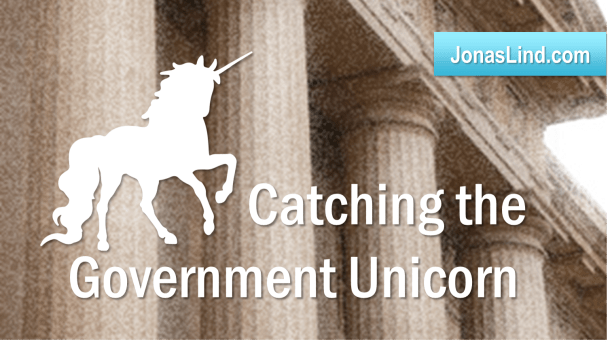 When you think of the public sector, the last thing you probably think of is speedy transformations. Most people associate the government with slow politicians deliberately delaying progress in any direction.

Government unicorns exist, and we need to be paying more attention to them.

What exactly is a ‘government unicorn’?

In the private sector, a unicorn is simply a privately held startup that has a valuation of at least $1 billion.

The term was coined in 2013 by venture capitalist Aileen Lee in her article, “Welcome To The Unicorn Club: Learning From Billion-Dollar Startups.” After analyzing software startups founded in the 2000s, she estimated that only .07% of them ever reach a $1 billion valuation. She deemed them unicorns to represent the rarity of achieving such a status.

Since then, the world has become obsessed with tracking unicorns and trying to figure out what the next one will be. Fortune magazine has even created a Unicorn List. Some of the more popular unicorns in existence right now are Uber, AirBnB, and SnapChat, but every year sees countless more startups added to the list.

Unicorns come in all shapes and sizes, but if there is one thing that unites them all (besides the money), it’s the fact that they are able to quickly revolutionize the way something is done. Uber changed how we catch rides from one place to another. AirBnB changed the way we book overnight accommodations. SnapChat is a new way to communicate.

When we talk about government unicorns, this is what we mean. Ideas in the public sector carry no valuations, so the $1 billion threshold is meaningless. But they can still rapidly change the way things are done, disrupting old ways of doing things and paving the way for progress in the process.

An example of a government unicorn…

The Authorised Economic Operators (AEO) Program is a great example of how this can happen. This program is widely used by customs administrations to ensure that the movement of goods is done in a safe and controlled manner without negatively affecting efficiency.

The AEO Program was originally developed in Sweden by Swedish Customs and known as the Stairway Concept. The Stairway Concept made Swedish trade and industry more efficient by combining a cost-effective method of working with a re-engineering approach that exploited IT, and it was tailored to the needs of the customer.

The idea quickly spread from there. The United States used the experience from Sweden post 9/11 to introduce a similar security system (C-TPAT), and the World Customs Organization tailored an international standard (SAFE) on the concept in 2005. This is when the name Authorized Economic Operator (AEO) was introduced.

When the European Commission – the largest Customs union and market – created a legal basis for the AEO concept in 2008 through the ‘security amendments’ to the “Community Customs Code” (CCC) (Regulation (EC) 648/2005) and its implementing provisions, the system became an operational reality.

The programme progressed from facilitating a single country’s trade to regional trade, and today, its impact on the global trade industry can be felt through Mutual Recognition Agreements (MRAs) between countries. By mutual recognition of AEOs, two customs administrations basically agree to recognise each other’s AEO authorisation and provide reciprocal benefits to AEOs of the other country’s programme.

Today, 169 countries have agreed to implement the idea.

There is also a new paradigm of modern AEO programmes, like AEO Brazil, Trusted Trader Australia and UAEO in Dubai, that include a new range of features, services, benefits, and AEO KPIs (like predictability, speed and service). These programmes are also built to include coordinated border management (CBM), and some have already introduced the Single Government AEO Status.

The AEO is one example that can and should serve as inspiration for governments worldwide.

Transformational innovations with such widespread global impact like the AEO concept are very rare, but that is exactly why we need to study them and learn how their success can be replicated.

We believe that a lot can be learned by studying Government Unicorns like the AEO concept. The experience from these programs can be used as a base to develop tools and strategies to facilitate a global transformation of the public sector with the ultimate mission to improve our lives.

The Government Unicorn – they’re rare, but they’re out there. And it’s time to catch more.

Contribution: this article was written together with Lars Karlsson, Managing Director of KGH Global Consulting. Lars Karlsson is one of the most well-known customs leader in the world. He was previously the director of WCO responsible for the implementation of of international standards in 180 countries.

Lars Karlsson is the originator of the Swedish Customs Future Center Institute and the architect behind modern concepts like AEO, One-Stop-Shop and Green Corridor. He won the international Gothia Prize for Best Innovation in 2001 and in 2016 he was awarded a Doctor of Education (honoris Causa) Charles Sturt University, Australia.